If you upholster a piece of furniture in warmer months, you’re bound to feel attracted to lightweight cotton and linen in sunny colors and patterns. When winter hits, the choices feel all wrong and you find yourself craving rich velvet, chenille and suede in warmer, darker hues.

Always wanted a suede sofa but worried it will feel too heavy in the summer? Display your cotton silk striped settee through the summer, and then easily fit a suede slipcover over it in the winter and it becomes a cozy sofa. Same goes the other way. Love your velvet sofa but crave the look of linen? Try a custom slipcover.
Posted by Carrie at 9:55 AM No comments:

With the 4th of July only a week away, every store in the United States has been packed full of those infamous red, white and blue hues. It seems like for the next week everything is red, white and blue from food, to fashion and even home decor. So this got me wondering. Can red, white and blue find its way into my everyday life or is this strictly a seasonal color palette? Here's what I've come up with (actually here's what Google came up with).
This blue and white dining room (courtesy of Elle Decor) is okay. The red coral chandelier though, takes this room from okay to OMG. The bold pops of red on this subtle blue and white back drop add a "wow" factor that I just don't know that you could get with any other combination. 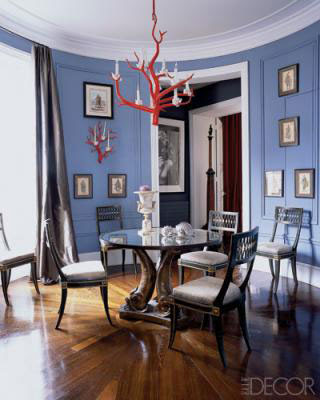 This modern living room doesn't scream "HAPPY 4TH OF JULY" to me but it does say "I'm sophisticated, modern and a little unexpected." Again, just a few subtle hints of red really pop against quieter colors. 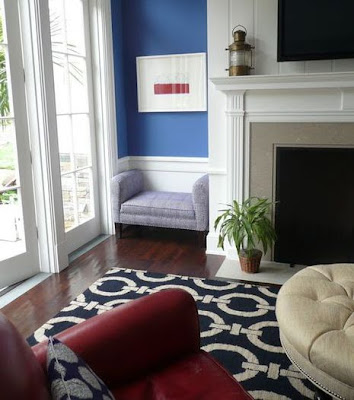 I love this room because of how many different colors it incorporates. This isn't just a red, white and blue room. There are so many different shades of red and blue and even more amazing to me is that none of them clash or compete. They all work together to create a palette that really flows together, subtly drawing your eye from one shade to another. 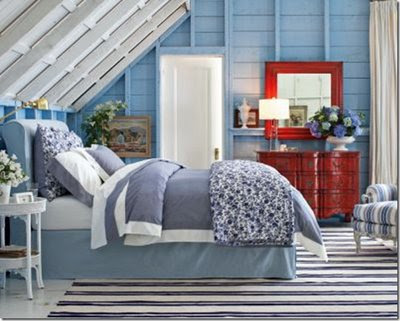 This last bedroom is a little more "Americana" but still yet, the classic oak wood and timeless madras plaid work so well with neutral colored walls and a pop of red on the night stand. 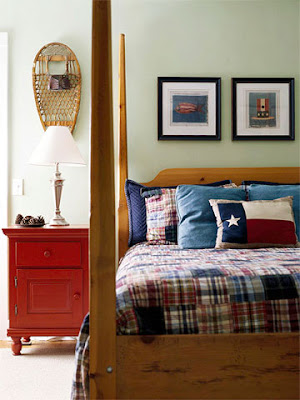 So I think I may be putting some of those red, white and blue decorations to use more than just once a year. Granted, it's not a color palette for everyone but it's surprisingly more versatile than even I would have ever thought.
Posted by Rachel at 12:58 PM No comments:

From Jewelry to Home Accents 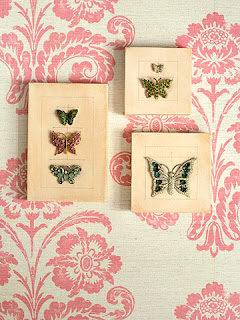 We are always looking for new and unique ways to decorate the home, especially on a budget. What better way to do that and reuse old, unused items then to use jewelry as home accents.

Have a beautiful brooch passed down to you but it's just not your taste? Don't keep it locked up in a jewelry box. Use it to create a piece of wall art like the butterfly brooches to the right. To create these pieces paint a gesso-finish artist's canvas with water-thinned dark umber paint and then rub it off. Use a graphite pencil to draw lines depicting the wingspans. Simple, easy and the end result is gorgeous! 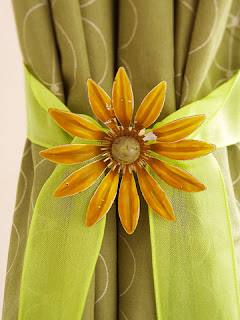 Another idea for that vintage pin is a pretty curtain tieback. Wrap sheer ribbon around the curtain panel and tie, leaving tails about a foot long. Pin the flower brooch at the knot. Brooches like this one are easy to find.

Have some necklaces lying around? Why not use them as wall art? Wrap a picture frames cardboard insert in paper or quilting fabric and suspend a pendent over it. Or spruce up that plain vase by restringing faux pearls on light-gauge wire and wind around the neck. Thread glass beads onto fishing line to make a sparkly "necklace" for another vase. 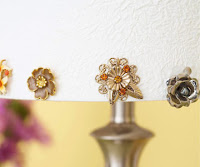 Have a set of earrings that are no longer a set? Decorate a paper lampshade by punching holes evenly around the bottom edge. Insert earring posts through the holes and secure with earring backs, or use clip-on earrings.
This also works great for adding a unique fringe to a table runner. Make sure the runner is fabric so the earrings can pierce freely. 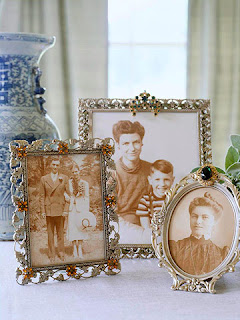 You can also dress up an old picture frame by attaching old earrings or brooches to create a gorgeous vintage frame that would please anyone to receive. 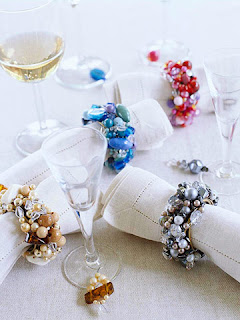 If bracelets are your weakness and you just have far too many slip them over votives for an eclectic look. Be sure to only use votive candles that are in glass holders.
Bracelets also make fantastic napkin rings. Take ordinary metal napkins rings and morph them into gem-encrusted beauties when you thread beads and crystals onto craft wire and wrap it securely around the rings. Thread more beads onto wire to make a coordinating set of wineglass charms.

Dig through that jewelry box and spend some time making some gorgeous and unique accents your home. It'll be fun and you'll love the end result!
Posted by Carrie at 3:05 PM No comments:

Before there was Tommy Bahama there was Alfred Shaheen. Best known in Hawaii where he got his start Shaheen has been in the textile industry since post-WWII. After a stint in the Army Air Corps, Shaheen returned to his family in Oahu to begin working in the family business. With a dream to expand the family business into making men's aloha shirts and women's apparel, Alfred started his own company with four seamstresses trained by his mother. 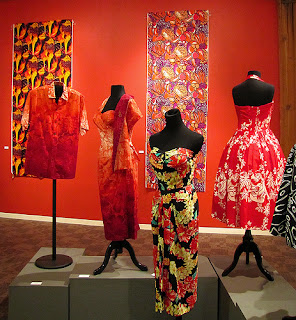 In the beginning like many Hawaiian manufacturers, Shaheen was receiving his textiles in from the mainland - a costly venture. Realizing just how much it was costing him he decided to start his own textile printing company - Surf 'n Sand Hand Prints. By 1950, Shaheen had engineered and built his own machinery to print, dye and finish fabrics. By 1952, he was printing more than 60,000 yards of fabric per month.

Despite Shaheen's worldwide distribution he still maintained the manufacturing facility in Oahu. He continued his business for over 40 years until the company closed its doors in 1988 when he retired. Today, his Hawaiian shirts, dresses and sarongs are some of the most prized and beloved vintage Hawaiian pieces one can get. 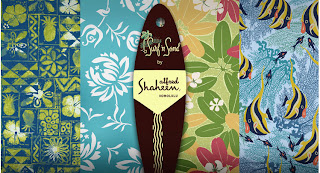 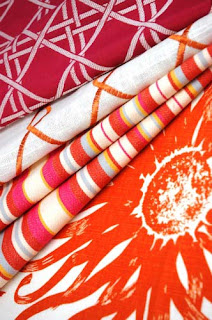 While the clothing is no longer being manufactured, Shaheen's fabric designs are, by company's such as Duralee/Suburban Home Fabrics. Partnering with Duralee to launch the Alfred Shaheen Surf 'n Sand Indoor/Outdoor collection in July 2010 they have since continued their partnership and released a line of indoor fabrics called Big Sur Designs, Copacabana Designs and Abbey Road Designs.

While you can no longer go into a store and by a freshly made dress, shirt or sarong by Shaheen at least you can by fabrics inspired by the man himself to bring a touch of Hawaii and Shaheen into your home.
Posted by Carrie at 12:39 PM No comments: