As we receive more and more fabric books and samples from various manufacturers we have noticed they all have 1 major pattern in common in at least 1 book and that's suzani inspired patterns. Many of us have seen suzani more and more in interior decorating and even fashion but most don't know what exactly it is or where it came from. Suzani comes from the Persian word for "needle" and the word refers to embroidered hangings or fabric coverings. (Like the image) 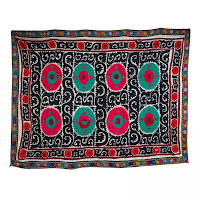 However, for most suzani lovers and collectors, the word has a more specific meaning. Suzani is synonymous with the finest old embroideries of Uzbekistan, in Central Asia. In recent years, we have witnessed a remarkable revival of this old traditional art form.

The birthplace of suzanis is in what is now Uzbekistan, the area along the Silk Roads that interconnected the cultures of Europe, Turkey and China with the Muslim world. With the establishment of the Silk Road, the Suzani art flourished. In the 19th century, Uzbek women produced excellent embroidered hangings, table covers, bed covers, wrapping cloths, and prayer mats for their households and their daughters' dowries.  In the 20th century, Communist rulers in Uzbekistan forbade hand crafts, including Suzani. With the fall of the Soviet Union in 1991, Uzbek artisans have begun the long process of reviving their centuries old craft traditions and techniques.

Because hand-made, traditional Suzani can be quite expensive many fabric manufacturers have begun to make it easier to get the suzani look but without the costs by printing and mass producing suzani inspired fabrics like the fabrics below. 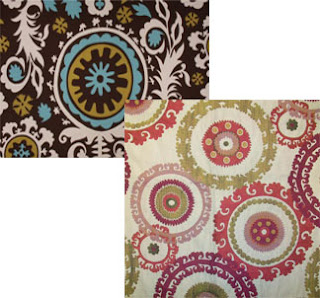 Feel free to stop by check out all the other suzani inspired fabrics that Interior Mall has to offer.
Posted by Carrie at 11:42 AM 1 comment: